skip to main | skip to sidebar


Pauline & I returned to Panama March 9 through April 2, 2012.  It was lovely being back in the warm ocean and seeing all of our friends.  We spent 1 week visiting friends in Boquete, Playa La Barqueta, and Caldera then headed to Pauline's house on the Caribbean near the San Blas (& very close to the oldest continuously populated town in Panama - Nombre de Dios).  We spent 2 weeks at Pauline's house... walking the beaches, finding amazing treasures like sea glass, locating a pair of nest-building Plumbeous Kites (per Ridgely's Birds of Panama book, "no actual nest has yet been reported, though breeding seems virtually certain"), and working on several fun/crafty projects.  Check out www.turtlecaymarina.com which is very near Pauline's beach.  The first few nights at Pauline's house, we had several encounters with bats.  We decided they must have been young, semi-retarded bats. Three nights in a row, one to two bats would "fall" from the rafters into my closet and end up in my bedroom.  They would "walk" on their wings for a few minutes and eventually fly into the living room where there were 2 fans.  After flying around and around the living room, each bat would run into the fan and be knocked to the floor (what about radar??).  Pauline would then "sweep" them outside and they would be gone by the following morning.  After 4 bats had the same experience, Pauline used expanding foam in the cracks and bingo... no more retarded bats.  While the visit to Panama was lovely, I had a huge number of no-see-um bites on my body most of the time (payment for walking the Caribbean beaches).  Pauline only found 1 scorpion in her house and only 1 spider bit me.  That said, it's nice to be back in Hawaii where there are no snakes and few bugs.  I do miss the warmer water of Panama, but feel much more "at home" in Hawaii.
Posted by Elaine Grace at 1:38 AM 4 comments:

Hello Everyone--
It's been quite some time since I last wrote on this blog. I hope you haven't been holding your breath. I have 30,000 miles left on American Airlines (enough to get me from Kona, Hawaii to Panama City, Panama, and return), so I've decided to have a Panamanian Adventure in March. I'll meet my friend Pauline (you'll remember her from previous adventures) in Miami and we'll travel the wild roads of Panama for 3 weeks. As it gets closer to March, I'll write more in this blog.
Posted by Elaine Grace at 6:42 PM 3 comments: 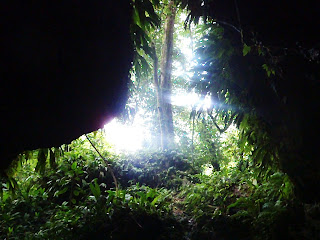 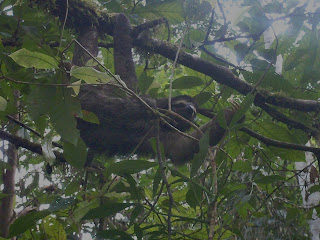 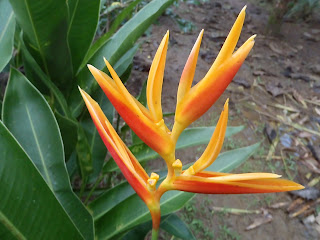 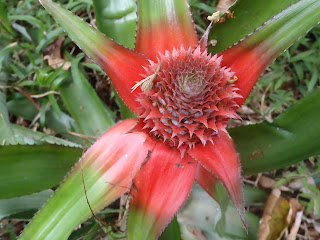 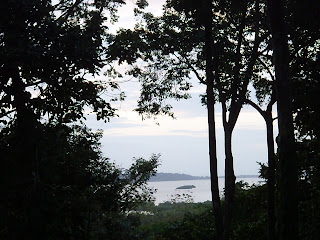 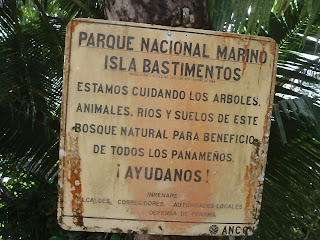 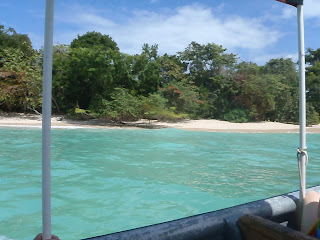 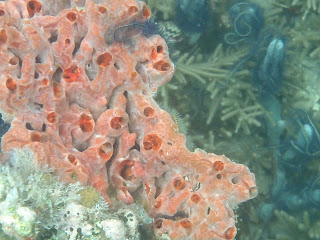 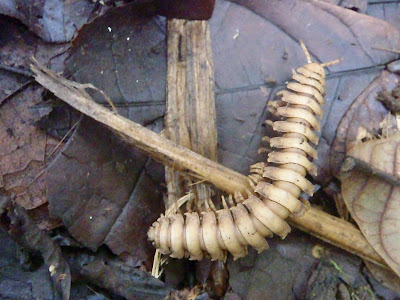 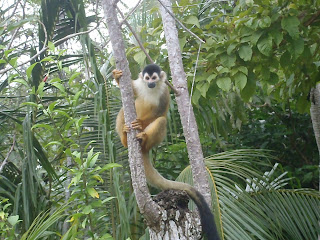 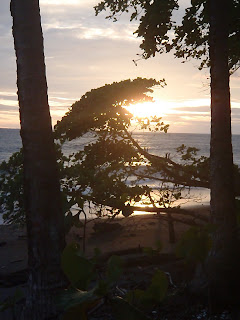 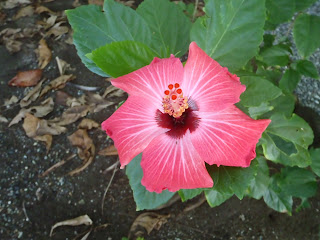 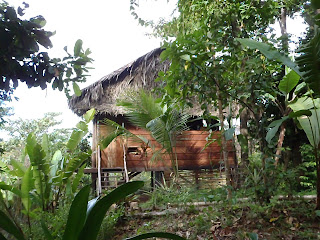 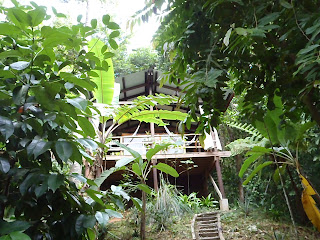 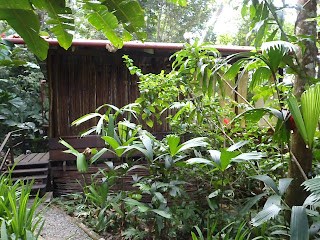 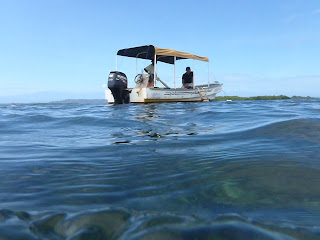 Hello Faithful Readers--
This will be my last Panama blog because I have moved to the Big Island of Hawaii.  My last two weeks in Panama culminated with a trip to the La Loma Jungle Lodge and Chocolate Factory.  I have so many pictures from Mono Feliz (I took Allan there before La Loma) and the Jungle Lodge that I'll put those in the next Panama Blog.
Allan had a great time in Panama but was somewhat overwhelmed by the diesel spewing out of many of the cars.    For a well rounded experience, I took him to Boquete (Tuesday Market and a hike on the Pipeline Trail), Kayaking in the Mangrove near Playa La Barqueta, Mono Feliz, and La Loma.  I will talk mostly about La Loma since I've covered the other locations in previous blogs.
I never would have heard about La Loma Jungle Lodge and Chocolate Factory located on Bastimentos Island near Bocas Del Toro had the couple who own and run the Lodge (Henry and Margaret) not needed a place to stay on a beach near David.  They found Nina and Richard's condo (where they stayed for 4 nights) which lead them to my condo for another 4 nights last year.  I exchanged with them and got to stay at La Loma for free.
Lucky for us, it was a beautiful drive over the Continental Divide and the weather remained sunny for most of the 4 days we were there (we had some exceptional hard rain... but that was mostly at night).  Since Allan and I are raw fooders, we brought our own food and didn't partake in any of the gourmet meals.  The first day we spent snorkeling, sunning and walking around Zapatillas Cays (a set of 2 islands protected by the ANAM, Panama's National Park Service).  It was lovely, but somewhat crowded.  We would have gone to the less used island, but it was blocked by huge waves.  It rained the next morning (Thursday), but was clear by afternoon, so we went on the Cave/Mangrove tour.  That was my favorite thing to do because I got to bird on the mangrove as the boat driver paddled us slowly toward the cave trail.  We saw several montezuma oropendolas (love their call), one sun grebe (a new bird for my list), eight capuchin monkeys leaping across the mangrove and four 3-toed sloths (one with a baby) eating in their favorite trees (cecropia). The cave was very interesting and endlessly long, requiring some swimming (which we didn't do).  There were tons of very healthy bats (including vampires) and bat guano.  On Friday, I caught a boat ride to Bocas Town, then a second boat ride to Almirante, then drove to Changuinola where I wire transferred all of my money back to the U.S. (so I can buy land in Hawaii). I didn't return to the Lodge until 4:30 (Allan spent a pleasant day relaxing and reading).  We left Saturday morning and had a very pleasant drive back to the beach and my going away party (DJ'ed gringo music where Allan was said to have danced NOT like a white boy).
So, if you want to see what I'm up to, go to my Hawaii Blog at www.elaine-in-hawaii.blogspot.com!
Posted by Elaine Grace at 5:34 PM 1 comment: 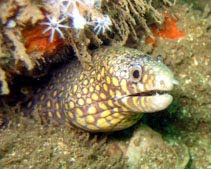 Seven dolphins! How could we be so lucky? My neighbor John Hahn arranged the trip out to Isla Gomez in the Parque Nacional Marino Golfo de Chiriqui. Twenty-one of us from La Barqueta left Boca Chica via a slow-moving catamaran on January 12 (now don’t be humming the Gilligan’s Island theme song). The weather was absolutely stunning, especially when compared with the day before when I led 3 friends up the Pipeline Trail in Boquete in a constant downpour (it’s the dry season, for God’s sake). Our first stop was Isla Bolena. We didn’t go ashore. Instead we hopped into the warm Pacific Ocean and snorkeled around a small reef. After 20 minutes, we got back onto the boat and headed for Isla Gomez (very close to Isla Parida). Even though this was my fifth time to Isla Gomez, I’ve never grown tired of this lovely island. It’s the perfect island paradise… white sand beaches, palm trees, warm tropical water, calm-clear snorkeling. The last time I was here (with Leslie and her sisters) I saw a huge spotted eagle ray. This time I saw a jewel moray eel hunting in the shallow rocky reef. Tony and Roy saw an octopus… very cool! On the return trip back to Boca Brava and Boca Chica, were thoroughly entertained by 7 bottlenose dolphins that leaped and played in front of the boat for 15 minutes. John took a great video with his camera (I forgot mine). If I get a copy of his video, I’ll add it to this blog.
Today (January 14, 2011) I went on my last (at least for the time being) birding adventure with the Boquete Birders. I’ve never seen such variety. At the first set of ponds, we saw the usual suspects (anhingas, egrets, woodstorks, northern jacanas, purple gallinules) and several very UNUSUAL birds. The most unusual (for me) was the peregrine falcon. I didn’t even know we had peregrines in Panama! In fact we saw 2 different peregrines in 2 different locations. As Ridgely says, they are “uncommon, transient winter residents in coastal areas”. Shari nearly had a heart attack when she spotted a pair of scarlet macaws! Scarlet macaws “now found only on Coiba Island and remote parts of southwestern Azuero Penninsula” (Ridgely) aren’t suppose to be here. It turns out I was the only one who knew there is a group of 15 or so scarlet macaws that were hand-raised nearby and are often seen at a nearby house in the early morning. Hummm. Legally, you can’t put a bird on your “life-list” if the bird is domesticated… which these were. Oh well! We also saw 3 boat-billed herons, 2 roseate spoonbills, black-necked stilts, large groups of flying black-bellied whistling-ducks, huge groups of flying wood storks, Amazon kingfishers and orange-chinned parakeets!
I'm looking forward to Sunday night when I pick up Allan (from Hawaii) and begin the adventure of showing him around Panama.
Posted by Elaine Grace at 9:35 PM 4 comments: